The modern Aston Martin V8 Vantage is a compact sports car. Aston Martin previously used the "Vantage" name on its highest-performance vehicles, and notably used the "V8 Vantage" name on their supercar of the 1970s and 1980s. The modern car, in contrast, is the lowest line in Aston's 3-model lineup, and is intended as an affordable volume model to compete with the Porsche 911.

The V8 Vantage was first seen at the Geneva Motor Show in 2005. The two seat, two door coupe has a bonded aluminium structure for strength and lightness. The 4.38 m (14.4 ft)-long coupe has a hatchback-style tailgate for practicality, with a large luggage shelf behind the seats. Note that Aston Martin invented the hatchback body style with the 1953 DB2/4.

The V8 Vantage was initially powered by a 4.3 L quad-cam 32-valve V8 which produced 380 hp (280 kW) at 7,300 rpm and 302 lb·ft (409 N·m) at 5,000 rpm, however models produced after 2008 had a 4.7 liter V8 which produced 420 hp (310 kW) and 350 lb·ft (470 N·m) of torque. Though based loosely on Jaguar's AJ-V8 engine architecture, this engine is unique to Aston Martin and features race-style dry-sump lubrication, which enables it to be mounted low to lower the centre of gravity. The engine is assembled by hand at the AM facility in Cologne, Germany, which also builds the V12 for the DB9, DBS and V12 Vantage. The cylinder block, cylinder heads, crankshaft, connecting rods, pistons, camshafts, inlet and exhaust manifolds, lubrication system and engine management are all unique to the Aston Martin version.

The V8 Vantage can accelerate to 60 mph (97 km/h) in 4.9 seconds. The V8 Vantage is able to keep up with its more powerful relative, the Aston Martin DB9, because of its lighter weight. The engine is front mid-mounted with a rear-mounted transaxle, giving a 49:51 front:rear weight distribution. 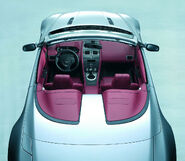 The V8 Vantage is Aston Martin's highest volume and most affordable car in quite some time; the mass market Aston, if you consider $120,000 hand-crafted sports car "mass market". It's goal is to fuse Aston Martin style with everyday usability, and compete with the Porsche 911's and BMW M6 type cars.