The Aston Martin One-77 is a hypercar set to be manufactured by premium British car company Aston Martin in 2009 [1]. It will utilise the same engine featured in the DB9, DBS and V12 Vantage, producing 700 hp. With a price tag of £1,050,000 and only 77 units slated for production, the One-77 is the most powerful, most expensive and most exclusive car Aston Martin has ever produced.

The design of the car distances itself from the rest of the Aston Martin range, mainly due to aerodynamic and drag coefficient issues, and the car's monocoque shell is made entirely from carbon fibre.

Aston Martin aims to offer customers the option to have the car built to their exact specifications, including details such as the sensitivity of major components.

Aston Martin have officially stated that just 77 examples will be built, with a price in excess of £1,000,000 excl. VAT.

The One-77 uses Aston Martin's existing V12 engine, albeit heavily modified to cope with the increased pressure on major components. The engine has also been enlarged to 7.3-litres from 6.0-litres, and placed 100mm lower in the car to sustain a low centre of gravity.

Engine builder Cosworth aided the company in modifying the engine for a high-performance vehicle, allowing for a 10% loss in engine mass and around 700 bhp.[2] 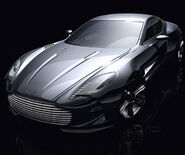 In September 2020, Aston Martin launched its coach-built model based on the One-77, the Aston Martin Victor, designed by Aston Martin Lagonda designer Kaize "Ken" Zheng and unveiled at Hampton Courts Concours 2020 with circular-shaped headlights reused from 1977 Aston Martin V8 Vantage, side exhausts & side bumpers reused from Track-only Vulcan.

Aston Martin have officially stated that just 77 examples will be built, with a price in excess of £1,000,000 excl. VAT.

The Aston Martin One-77 has been awarded with several internationally renowned design awards including the Concorso d’Eleganza Design Award for Concept Cars and Prototypes, the GOOD DESIGN award by The Chicago Athenauem: Museum of Architecture and Design in North America and the "Best Design" award by the UK motoring magazine Auto Express. and many others.

Retrieved from "https://automobile.fandom.com/wiki/Aston_Martin_One-77?oldid=112014"
Community content is available under CC-BY-SA unless otherwise noted.