The DBS's 510-hp V-12 is expected to be good for a 0-to-60 mph time of 4.3 seconds, along with a top speed of 191 mph. The DBS also features ceramic-composite brakes and a paddleshifted six-speed transmission, which will give the car "a much more raw driving experience".

One of the three stunt DBS used for the 007 film, Casino Royale. 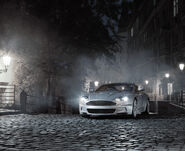 On January 17, 2006 it was announced that a new Aston Martin DBS would be used in the 21st James Bond film Casino Royale. The new DBS is based on the DB9, more specifically the DBR9 race car. Built on the VH Platform the car shares its roof, sidescreens and wheelbase with the DB9, but sits lower (by 25mm) and wider (by 40mm) than the DB9. Visually, the front end is dominated by air scoops and cooling ducts which help cool the six-litre V12 engine which has reportedly been uprated to produce more than 500 bhp. At the rear are a carbon diffuser and an integrated rear lip spoiler. Other details include a six-speed manual transmission and a removable stopwatch. A special helmet pod behind the driver's seat is present for Casino Royale but will not feature in the production version. Aston Martin is expected to build only 300 examples of the new DBS.

The DBS was the successor to the famed Aston Martin DB6. Powered by a straight-6 engine, it lasted from 1967 until 1972, before being replaced by the Aston Martin Vantage. It was a larger coupé than the DB6, with four full seats, but was powered by the same 4.0 L engine as the previous car. The engine normally produced 282 hp (210 kW), but a no-cost DBS Vantage option upped output to 325 hp (242 kW). The DBS had a more modern look than the DB6, and arguably the Vantage as well, with a square grille atypical of Astons.

The DBS was used by George Lazenby's James Bond in the 1969 film On Her Majesty's Secret Service. Unlike Bond's previous car, the Aston Martin DB5, no gadgets were seen in this car, other than a mounting for a telescopic-sight rifle in the glove compartment. In the final scenes of the film, Bond's wife, Tracy, is shot and killed while sitting in the car.

An Aston Martin DBS was later used for the short-lived TV series The Persuaders! (1971-1972), in which Roger Moore's character Lord Brett Sinclair drove a gold-painted 6-cylinder DBS, which through the use of alloy wheels and different badges had been made to look like a V8 model.