The Aston Martin DB9, is a grand tourer launched by Aston Martin in 2004 and is the first new car to be built at Aston's Gaydon facility. The name "DB" stems from David Brown, the owner of Aston Martin for a sizeable part of its history. This model, which was designed by Ian Callum and finished by his successor, Henrik Fisker, superseded the now-discontinued Aston Martin DB7 (also by Callum) which started production in 1994. 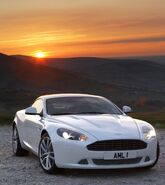 The DB9 comes in two variants; coupé and "Volante" convertible, each with a 6.0 L 450 bhp (335 kW) V12 engine taken from its sister car the V12 Vanquish. The Vanquish engine has 10 bhp (7 kW) more. In fact, this V12 engine is why Aston Martin did not call the car the DB8, which could suggest that it has only eight cylinders. One report states that Aston Martin believed that this car was such a quantum leap from the Jaguar XJ-S based DB7 that it named it DB9 instead of DB8, which they thought would indicate a gradual evolution. As of 2004 production is expected be up to five thousand units a year which is roughly the same as its rivals, in particular the Ferrari 360 Modena and Porsche 911 Turbo. This should ensure that Aston Martin will continue into the 21st century. Traditionally being a maker of more exclusive automobiles, CEO, Dr. Ulrich Bez assures Aston loyalists' that production of the new and smaller V8 Vantage will be larger than previous model build outs, but nonetheless, Aston will still retain a small statistical amount of the high end sport's car market.

Based on the engine of the Vanquish, the Aston Martin DB9 runs on a 6.0 liter V12 engine producing 450 bhp(335 kW) and 570 Nm(420 lb ft) of torque. That results in a power to weight ratio of 263 bhp/tonne which is one of the highest figures in its class. The DB9 accelerates from 0–100 km/h(62 mph) in 4.9 seconds on a manual gearbox and it will keep accelerating until it reaches its top speed of 300 km/h(186 mph). The DB9 will also produce 80% of the V12 engine's torque from 1500 rpm. In result, mid-range performance is astonishing, giving instant power almost regardless of engine speed or gear. The DB9 comes with two kinds of gearboxes, a 6 speed manual gearbox with twin-plate clutch and a 6 speed "Touchtronic 2" fully automatic gearbox with dashboard-mounted buttons to select Park,Reverse,Neutral and Drive modes. A flappy paddle gearbox made from magnesium is also optional sited behind the steering wheel.

The DB9's beautifully hand-crafted interior. It uses Bridge of Weir leather and choices between Mahogany, Walnut and Bamboo wood paneling in matte-finish. 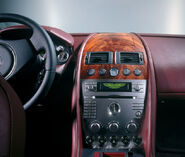 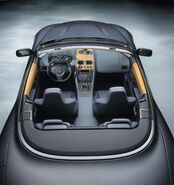 The main competitors of the DB9 are the Porsche 911 Turbo and the Ferrari F430. Both of those vehicles are way more expensive than the DB9 with the Porsche costing 122.900$ and the Ferrari a mind-blowing $173,079 - $201,213. Although both competitors are more powerful and faster around the track but they don't give you the sense of prestige as much as the DB9 does.

The DB9's interior is made with leather and walnut wood. In newer editions, the leather is additionally given hand-stitched accents and joins. On the dashboard, satnav and Bluetooth are standard in later models (options on earlier models). Later models also offered a Dolby Prologic sound system can be connected to satellite radio, a six-CD changer, an iPod connector, a USB connector, or an auxiliary input jack. This sound system can be upgraded to aBang & Olufsen stereo. The coupe comes standard with two front seats and rear seats. A seating package, which removes the back seats and replaces the front seats with lighter seats made of Kevlar and carbon fibre, can be chosen. The boot is 187 L (6.6 cu ft) in the coupe or 136 L (4.8 cu ft) in the Volante.

The car has been adapted for sports car racing by Prodrive. The DBR9 first raced at the 12 Hours of Sebring in 2005 and won the LMGT1 category, but was beaten by arch-rivals Corvette Racing in the Le Mans GT1 class.

In 2006, Aston Martin introduced a "Sports Pack" which includes increased structural stiffness, lighter forged aluminum wheels, lower (by 6mm) ride height, revised spring and damepr rates and the like. The upgrades address the criticisms to the car as expressed by some automotive journals, in particular the UKs Evo Magazine.

On BBC's Top Gear, presenter Jeremy Clarkson raced an Aston DB9 against a TGV from Surrey to Monte Carlo, with the DB9 winning by a few minutes. During the race, Clarkson proclaimed the DB9 to be "motoring perfection". This comment was topped when a new section had to be added to 'The Cool Wall', which rates the respectability of cars from 'Seriously Uncool' to 'Sub-Zero'. A fridge was added for the DB9 as it was thought to be cooler than any other car on the wall. Since then the DB9 has been joined in the "fridge" by the Aston Martin V8 Vantage, and it remains there even though it was purchased, in the meantime, by Clarkson (Cool Wall rules state that cars owned by any of the show's presenters are deemed Uncool). Despite not being present on the Power Lap board, it had been driven to a lap time of 1:27.1—exactly the same time as the Vanquish S, which costs nearly £60,000 more and exceeds the DB9's power by 60 bhp (45 kW). Clarkson remarked that the DB9 was the better buy because it is equally fast as the Vanquish, costs less, and has a much-improved gearbox. In the '2006 Supercars' special edition of Top Gear magazine, it was a contestant for car of the year.