The car was made before the United States began implementing automobile safety laws in 1967. Regardless, later examples have seatbelts but not any other safety devices. 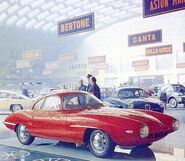 Coefficient of drag is 0.28, the same as the sixth-generation Chevrolet Corvette

The Sprint Speciale was originally based on the Alfa Romeo Giulietta, the post-war Alfa that came in coupe(Sprint), sedan(Berlina), and convertible(Spider) variations. The Veloce was a more performance-oriented option that could be had on the Sprint or Spider. The Berlina Ti was the performance variant of the Berlina sedan.

The Giulietta Sprint Speciale was a more upscale version of the normal Sprint and featured a smooth, 2-door gran turismo body by Bertone. Aluminum was used for the bodies of the first SS's, but was changed over to steel after 1959. In the efforts to make the SS as light as possible, the wheelbase was made four inches shorter than the Sprint's. Since it was intended for competition use, the SS only had room for two people and a limited amount of storage for luggage. However, this allowed the cabin to be much more spacious than the four-seat Sprint.

At the 1960 Turin Motor Show, Zagato showed their own version of the SS. Called the Giulietta SZ (Speciale Zagato), it was a much more rotund car, resembling early Porsches in shape. It was meant entirely for racing use, and was lighter then the SS because a great amount of the underframe was removed. It was, understandably, less comfortable, less practical, and thus less popular than the SS with the general public.

Franco Scaglione was the chief designer at Bertone and was responsible for the design of the SS. It is considered to be a 'production' version of the sensational B.A.T. (Berlina Aerodynamica Technica) cars that Scaglione designed for Bertone in 1953, 1954, and 1955.

Bertone was also responsible for production of the SS. Early SS's made by Bertone had sharper raked hoods and lower grilles, giving them the nickname "Low Nose". 101 of these cars were made between 1958 and 1959, six of these used lightened aluminum for the body and plastic for the windows.

The Alfa Romeo Giulia was introduced in 1962, and replaced the Giulietta lineup. Despite this, the SS continued using many parts from the Giulietta and added newer Giulia parts as well. The Giulia received an upgraded Veloce 1570cc engine in 1963 that produced 126 horsepower.

Retrieved from "https://automobile.fandom.com/wiki/Alfa_Romeo_Giulietta_SS?oldid=96646"
Community content is available under CC-BY-SA unless otherwise noted.