Autopedia
Register
Don't have an account?
Sign In
Advertisement
in: Current Models, Acura vehicles, All wheel drive vehicles,
and 17 more

The Acura RL is the top-of-the-line sedan in the range of Honda's North American luxury brand Acura. It is a rebadged version of the fourth-generation Honda Legend and replaced the Acura Legend in 1996.

All Acura RLs are built in Saitama, Japan. The very first Acura RL rolled off the assembly line on January 4, 1996.

There is only one trim for the Acura RL, but it is packed with features. It is powered by a 3.5L 290hp V6 engine, 5-speed automatic transmission, and standard all wheel drive. Some of the standout features include:

Today's actual prices for the Acura RL can be found at CarsDirect.

Although the current version of the RL was only released in 2005, three-year reliability inspections on the 2003 model, performed by Automotive Information Systems, earned that model an overall Green rating in every category.

Safety tests performed by the NHTSA earned the 2007 RL excellent ratings in all categories. For all front-impact, side-impact, and 2WD rollover tests, the RL received overall 5-Star ratings. Some of the standard safety equipment found on the RL include:

A full list of colors is available on CarsDirect.com. Some of the possible combinations include:

According to Kelley Blue Book, "the RL is expected to have a slightly better-than-average residual value over a five-year period, falling below the Infiniti M35 and Lexus LS 430 but besting the Audi A8 and Cadillac DTS."

A revised car, known internally as "KB1", was launched in late 2004 for the 2005 model year, and is much reminiscent of its competitor, the Mercedes-Benz E-Class. Still without the much-rumored V8 engine, it features a sophisticated all wheel drive system Acura calls "Super Handling All Wheel Drive". It integrates active differentials with the all wheel drive system and traction control to improve handling, similar to the "ATTS" system featured on the 1997 Honda Prelude SH. This all wheel drive system was in an issue of Popular Science as one of the best automotive innovations of 2004 and earned the 2005 "Tech car of the year" from cnet.com.

The 225 hp (168 kW) 90° C-series V6 engine was replaced with a new 60° J-series 3.5 L motor delivering 300 hp (224 kW; later revised to 290 hp). To give the car a more sporty feel, the car features a five-speed automatic transmission with shift paddles mounted on the steering wheel in the current, racing-car derived fashion. Other features found on the 2005 RL include DVD Audio, the ability to see traffic movement in real time utilizing XM Satellite radio, as well as extensive use of aluminum and carbon fiber. Pricing is up to US$49,100 without destination.

For 2006, the Acura RL was also sold with the optional 'Technology Package' including features such as adaptive cruise control, Collision Mitigation Avoidance System, and Michelin PAX run flat tires.

In 1999, addressing those concerns, the RL received a front and rear facelift that included the addition of newer, more stylish Xenon headlights. The difference, while seemingly subtle, gave the car an entirely new look. Suspension and chassis were stiffened. The Acura RL was back in the fold and sales increased.

In 2000, a larger navigation system screen was added. Along with that larger screen was the conversion to easy-to-replace DVD map databases. OnStar was added in 2002 as well as XM Satellite Radio in 2003. Absent a major redesign in 8 years, however, the RL's sales slipped to their lowest levels in the 2004 model year. Acura and dealers both provided generous incentives on the final models.

The 2004 3.5RL's engine was the last in the Honda and Acura lineup not to use VTEC, Honda's variable valve timing system. The 2004 RL was also the last Acura to use the numeric designator for its engine displacement.

In 1996, the replacement for the Acura Legend was introduced. Known internally as "KA9", officially, RL originally stood for "Road Luxury," however some suggest that it stood for "Replaces Legend." Whatever its meaning, the 1996 Acura 3.5RL was introduced to lackluster reviews. The automotive world had been expecting a true competitor to the Lexus LS to emerge. Yet it is likely that Acura will release a new model larger than the RL to compete with the Lexus. The RL fell short in all categories and is continuing to drop in sales; it is likely there will be a redesign of the redesigned RL, as reported by AutoWeek. Laying to rest predictions of a VTEC V8 powerplant, the 3.5RL was powered by a 3.5 L V6 engine, derived from the previous Legend's 3.2 L unit. The engine provided just 210 hp. Handling was soft and ponderous. Interior space was adequate, but still tight.

Despite all the compromises, the RL was still a competent vehicle. Few could find fault in it and it provided a serene, almost silent highway ride. The transmission, a 4-speed automatic, was smooth and silky. Reliability and fit-and-finish were excellent. Still, a lot was lacking in the car and sales suffered in the first three years.

The 1996-1998 Acura 3.5RL was a conservative, well-designed, and well-mannered luxury vehicle. The 3.5RL provided all of the expected luxury features of vehicles costing much more, yet provided the practicality of a 3.5L, 210HP V6 with excellent low-end torque reaching a peak at a low 2800 RPM. The 1998 3.5RL was upgraded with a refined suspension. Acura engineers, as usual, found a way to increase the firmness of the suspension without any additional harshness. It provided better driving dynamics as well as overall vehicle control. Other additions for 1998 included new wheels that improved overall style with a subtle sportiness. The first generation Acura 3.5RL has proven itself in the long-run. Road Luxury. Refined Luxury. The 1996-1998 Acura 3.5RL. 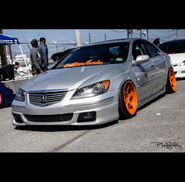 The second-generation RL appeared on Car and Driver's Ten Best list for 2005.