The 24 Hours of Le Mans (24 Heures du Mans) is the world's most famous sports car endurance race, held annually at Circuit de la Sarthe near Le Mans, France, in the French Sarthe département. It is organised by the Automobile Club de l'Ouest (A.C.O). 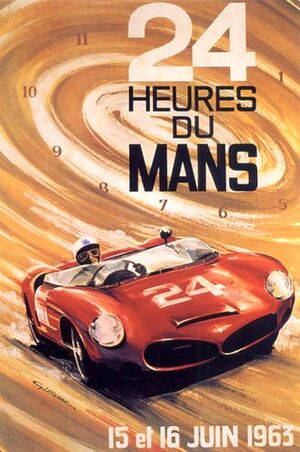 The 12 Hours of Sebring, 24 Hours of Daytona and 24 Hours of Le Mans were once widely considered to be the trifecta of sports car racing; driver Ken Miles would have been the only driver to win all three in the same year but for an error in the team orders of the Ford GT40 team at Le Mans, in 1966, which took the win from him, although he finished first.

The race is run on a semi-permanent track which, in its current configuration, is 13.650 km (8.482 mi) long, utilizing mostly country roads that remain open to the public for the majority of the year. Over the years, several purpose-built sections have replaced the normal roads, especially the Porsche Curves section, which bypasses the dangerous former Maison Blanche section, between buildings. The permanent Bugatti Circuit surrounds the facilities at the start/finish.

Usually, around 50 cars race simultaneously, in a number of different categories and classes. Current classes are LMP1 and LMP2, for "Le Mans prototypes" and LMGT1 and LMGT2, for Gran Turismo or "GT" classes. The overall winner is the car that covers the greatest distance in 24 hours of continuous racing. This rule appears obvious but the 1966 race saw a surprise winner, among the three Ford GT40s that were leading. Ford ordered the leading #1 car to slow down to let the #2 and the #5 cars catch up, in order to create a photo opportunity[1] with all three GT40s crossing the line 1, 2, 3, in a staged finish, only a few meters apart. Yet the #2 car that had covered the same number of laps (360) was pronounced the winner, as it had started further behind on the grid and thus covered a slightly bigger distance in the same time.

In addition, a car must cross the finish line after 24 hours, to be classified, which leads to dramatic scenes where damaged cars wait in the pits or on the edge of the track close to the finish line for hours, then restart their engines and crawl around the track one last time in order to finish after the 24 hours and be listed with a finishing distance, rather than dismissed with DNF (Did Not Finish).

In recent years, each car has a team of three drivers. Before 1970 only two drivers per car were allowed and even solo driving was permitted, in the early decades. Until the early 1980s, most of the cars were raced with a two-driver team. In 1952, Frenchman Pierre Levegh competed alone and looked like the winner but made a shifting mistake in the final hour which handed victory to a Mercedes-Benz 300SL. Luigi Chinetti won in 1949 with a 23.5 hour stint behind the wheel. In 1950, Louis Rosier won the race with his son Jean-Louis Rosier, who drove the car during only two turns.

Traditionally, the race starts at 16:00 on the Saturday, although in 1968 the race started at 14:00, because of the lateness of the race on the calendar, and 1984 when the race started at 15:00 due to the conflicting French General Election. In 2006, the ACO scheduled a 17:00 start time on Saturday, June 17 in order to maximize television coverage in between the FIFA World Cup games.

The races used to begin with what became known as the "Le Mans start": cars are lined up on one side of the track, drivers on the other. When the French flag dropped at 16:00, the drivers ran across the track to their cars, entered and started them. This became a safety issue after the introduction of safety belt harnesses in 1967, which needed to be properly strapped, preferably by mechanics. At that time drivers entered the first curves with unfastened belts and locked their belts in the straight, if possible.

In 1969, for his first Le Mans 24 hours, a young Belgian talent and F1 GP winner, Jacky Ickx, made a pointed demonstration of the danger of this start method, when instead of running across the track to his machine, he slowly walked towards it, then entered his car and locked the safety belts properly. Sadly, in the first lap of the race, the privateer racer John Woolfe was killed. Despite starting in the last position with an outdated Ford GT40, Ickx managed to win the race in a dramatic finish 24 hours later by only 120 meters. Interestingly, while driving a Porsche 911 to Paris after the race, Ickx was involved in a road accident where he escaped unharmed, having worn his seatbelt.

So the traditional Le Mans practice was partially discontinued the next year in 1970; for this year, the cars were still lined up in echelon formation along the pit straight, with engines off, but the drivers were strapped in prior to the start. On the starter's signal, the drivers could start their engines and start the race. In 1971, a full rolling start was introduced, as used in the Indianapolis 500, thus called the "Indianapolis Start".

The Le Mans start is also the reason why left-hand-drive Porsche street cars continue to have their ignition switches on the left of the steering column rather than on the more customary location of the right-side: this enabled the driver to start the engine with the left hand while engaging the 1st gear with the right hand, depressing the clutch with the left foot and stepping on the gas with the right foot simultaneously, thus allowing the Porsche to get off the starting line more quickly than other race cars.

Unlike many other races where the speed in corners and acceleration is more important, top speed was a critical parameter for being competitive in Le Mans. This led to special body designs like the "Long Tail" bodies pioneered by Charles Deutsch and Robert Choulet. Braking at the end of the Mulsanne Straight is also critical; the first use of disc brakes on a car was for a Jaguar C-Type racing at Le Mans in 1953. The Mercedes-Benz 300 SLR still used drum-brakes in 1955, but had an additional opening hood which was used as a parachute-like "air brake".

Cars were reaching impressive speed on the Mulsanne: in 1971, during night practice, a Porsche 917LH (LangHeck - long tail), driven by young Mexican talent Pedro Rodriguez (1968 Le Mans winner), clocked at a top speed of 398 km/h, or about 249 mph.

During the 1970s, top speeds decreased after the introduction of new regulations that reduced the size and power of the engines, while the evolution of aerodynamics allowed the engineers to improve the speed on a lap by increasing downforce and thus increasing speed in curves and reducing top speed. This evolution, which brings less stress on the car, was also favored by drivers because it made the car easier to drive, leading to lower forces in acceleration and braking while reduced speed in the straight required less attention and gave more relaxation to the driver which is an important benefit in a 24 hour race.

By the late 1980s, the fastest cars were again reaching impressive top speeds. In 1988, a WM P87 powered by a turbocharged PRV engine and driven by Roger Dorchy reached the speed of 405 km/h (251.7 mph) early in the race. This performance is generally considered as non-significant, though, because it was considered a media coup by a team seeking budget: the car was tuned for top speed with all air orifices taped, as a result the engine broke soon after. But the next year a Sauber Mercedes C9 reached a top speed around 400 km/h (248.5 mph) without any special tuning during the race, and FISA felt that it had grown unsafe.

Two chicanes were consequently put in place in time for the 1990 race to lower top speeds.

Le Mans is also known for the worst accident in the history of motor racing, the 1955 Le Mans disaster, in which over 80 people, including Levegh, were killed. In the shock following this disaster, many major and minor races were cancelled in 1955, like the Grand Prix races in Germany and Switzerland.

At the end of the season, having won World Championships in Formula One and Sports Cars, Mercedes withdrew from motor racing generally, and did not return until 1987. That today's DaimlerChrysler Corporation, owner of the Mercedes marque, is still aware of and sensitive to this incident was evidenced by their withdrawal in 1988, after the Sauber-Mercedes suffered high speed crash due to tire failure, and in 1999 after their CLR sports prototypes caught air and backflipped three times at Le Mans.

Similar accidents involving a Porsche 911 GT1 and a BMW V12 LMR happened at Road Atlanta during the ACO-licenced Petit Le Mans races in 1998 and 2000, respectively.

In a personal spat between the two companies' owners, Ford won the race four times (1966 to 1969) with its GT40, built for the express purpose of defeating Ferrari, after founder Enzo Ferrari backed out of a deal to sell his company to Ford.

The only Japanese company to win the race so far has been Mazda, which won the 59th race in 1991 with its rotary-engined 787B prototype. Toyota almost took the overall win in 1999, but mechanical woes in the final hour relegated them to second.

In 2005, Tom Kristensen set an absolute record of seven victories including six in a row, pulling ahead of legend Jacky Ickx who has a total of six wins. Kristensen could not extend his streak the following year as his car came in third while the sister car won.

In 2006, the new Audi R10 TDI LMP1 entered by Joest Racing became the first Diesel-engined car to win the 24 Hours of Le Mans. The winning car also bettered the post-1990 course configuration lap record by 1, at 380. However, this fell short of the all-time distance record set in 1971 by over 200km.

The 24 hours of Le Mans race was also famously featured in a 1971 movie, titled simply Le Mans, produced by and starring Steve McQueen. This film remains a classic which is still appreciated by racing fans. It was filmed on the circuit during the 1970 race using genuine racing cars of the day, like Porsche 917, Ferrari 512 and Lola T70. The camera car (a Porsche 908) used for the filming of the movie actually competed in the race and finished 9th, but it was not classified, since it had not covered enough distance between stops to change the film reels.

There was also a French film where the second half of the film focused on the 24 Hour Le Mans race called "Michel Vaillant", a popular French comic book, motor-racing hero. The film was released in late 2003, having entered a Panoz and a Lola for filming purposes (as genuine entries) in the 2002 edition of the endurance race.

Also on the TV show The Goodies, the episode entitled "The Race" involves the boys competing in the 24 Hour Le Mans Race.

Trap Speeds on the Mulsanne Straight