The 2009 #20 Halo Wars Toyota Camery made its debut in 2009 in the NASCAR Nationwide Series. It was the second themed Halo Themed NASCAR Race Car to be raced in any series.

The car was created in 2009 by Joe Gibbs Racing and Gamestop Motorsports. In late 2009, the car was completed and ready to be raced.

In late 2009, Joey Logano drove the car in one NASCAR Nationwide Event at Bristol Motor Speedway . The car never made another apperence.

The car never appered in a NASCAR Sprint Cup Series event but when NASCAR: The Game: 2011 was released, many gamers re-created the car and raced it as their own. 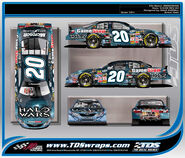 Front Of The Car

The Driver Joey Logano
Add a photo to this gallery
Retrieved from "https://automobile.fandom.com/wiki/2009_Halo_Wars_NASCAR_Nationwide_Series_Toyota_Camery?oldid=86144"
Community content is available under CC-BY-SA unless otherwise noted.