The Škoda Fabia is a supermini produced by Czech manufacturer Škoda Auto since 2000. It is the first model to use the Volkswagen Group's A04 platform, which it shares with the Volkswagen Polo Mk IV and SEAT Ibiza. It was the successor to the Škoda Felicia, which was discontinued in 2001. The Fabia is available in hatchback, estate and saloon body styles.

The petrol version of Skoda Fabia is packed with 1.2L, 1198 cc MPI engine type. The 12 V DOHC engine is packed with five speed manual transmission gearbox which offers a very smooth and fuel effective drive. This petrol engine of Skoda Fabia delivers an impressive power of 70bhp at 5400 rpm and a maximum torque of 108Nm at 3000 rpm. This higher level of power and torque results excellent acceleration that enables Fabia to cross the barrier of 100kmph in just 17.7 seconds and to touch the top speed mark of 149.5 kmph. The petrol powered Skoda Fabia offers a mileage of 13.2 on the city roads and 16.8 kmpl on the highways.

The diesel variant of Skoda Fabia is equipped with 1.4L turbocharged diesel engine packed with high pressure direct injection system in combination with 5 Speed Manual Transmission gearbox which is very efficient and performs without any vibration and makes driving a pleasure. The in line type diesel engine of Skoda Fabia produce a maximum power of 70bhp at 4000 rpm and a maximum torque of 155Nm at 1600-2800 rpm. This diesel variant of Fabia crosses 100kmph mark in a span of 14.35 seconds and it can touch the top speed mark of 143.6 kmph. This TDI diesel engine delivers a mileage of 15.1kmpl on the city roads and 19kmpl on the highways. 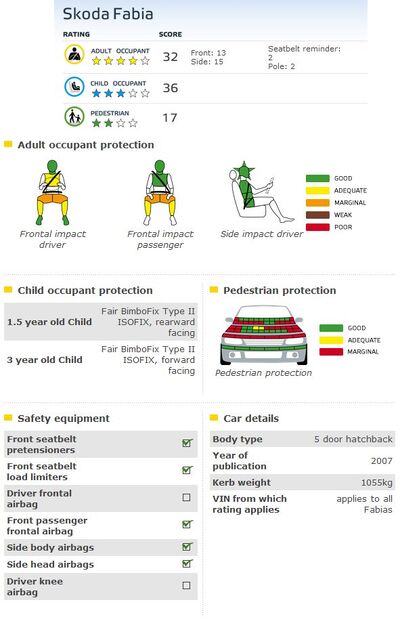 The second generation Fabia appeared at the Geneva Auto Show on March 2007.

It is slightly larger than its predecessor and takes styling cues from the new Roomster model.

The petrol engine linup is a mixture of newer engines from the Volkswagen Group and some carry overs from the outgoing model. The base 1.2 remains the same while the higher powered version will have its power output upped to 70 bhp. There is only a single 1.4 litre petrol on this model, producing 85 bhp. The range topping petrol engine will be the 1.6 16v engine producing 105 bhp. There will be an option to link this engine to a 6 speed tiptronic transmission.

Diesel engines consist of the same 70 bhp and 80 bhp 1.4 TDI units from before. The range topping diesel will be a 1.9 TDI producing 105 bhp.

It is rumoured that eventually a 1.4 TSI running at 125 bhp will become the range topping petrol and that the next generation vRS will also receive the 1.4 TSI to the tune of 170 bhp.

The second generation Fabia features side air bags, which may be fitted as standard in some markets with stringent safety regulations. Also available as an option will be head airbags.

Part of the Fabia's success is the fact that all of its mechanical parts are developed by or in conjunction with Volkswagen, but are offered in a package that is priced to undercut other models in the Volkswagen Group. The only trace of non-VW Škoda left in the Fabia is the 1.4 8v "MPI" Engine, which was a modification to Škoda's own 1.3 engine, and was used in pre-Volkswagen Škodas such as the Estelle and Favorit.

In 2005 the Fabia received a facelift, with changed front fog lights and grille, slightly different rear lights, new steering wheel and revised specification levels. Also the vRS had its final gearbox ratio changed. Most importantly the Sport model was added, with the 75hp 1.4 petrol being offered with a manual transmission. This engine was quickly dropped for the 1.2 HTP, which was not as powerful but is a much more free revving engine giving a more sporty feel, the sport also had its specification changed to include red seat belts and sunset privacy glass from the B pillar to the rear.

Again in 2006 the Fabia range shown at the Geneva Motor Show alongside the new Roomster leisure activity vehicle will have minor specification revisions. These include a center rear head rest, a central three-point seatbelt and an additional four bodywork colours. The 1.4 16v 75 bhp petrol engine is to be replaced with a more powerful 1.4 16v 79 bhp engine.

The term MPI (Multi-Point Injection) is used by Škoda to differentiate from 16v models and (in the case of the Octavia) FSI engines. The 75 bhp version of the 1.4 16v was only mated to Volkswagens four-speed automatic transmission with fuzzy logic operation until the addition of earlier sport models which mated it with a manual transmission. The 1.4 8v was dropped in 2003 as it will fail to meet future emissions requirements. Its performance is heavily hampered by its old OHV (Pushrod) design. The Fabia's overall performance and fuel consumption figures fall behind other city cars and small family cars as it is larger and heavier. However, the 1.2 HTP Engine was developed specifically for the Fabia and offers better performance and fuel economy, but later used in Volkswagens own Polo due to its high acclaim. HTP Stands for High Torque Performance.

Later in the Fabia's life the mid-range Comfort Model was dropped for the name Ambiente to fit in with the rest of the range. Other models include and included the Ambiente, Ambiente SE, Blackline, Silverline, Sport, Bohemia (Estate) and vRS. Various safety features and minor changes were made over time. Easy and Junior models are sold in Eastern European markets where budgets are lower. Some of these Fabias do not even have painted bumpers or gloveboxes. Also sold in such markets is the Fabia Praktik, which is a panel van version of the Fabia with the rear windows and seats removed. A lesser powered version of the 1.4 MPI with just 60 bhp is also sold in Eastern Europe.

Introduced in 2003, the Fabia vRS, while not the first diesel hot hatch, was the first exclusively diesel hot hatch, having no petrol equivalent. The engine is VW Group's 1.9 litre Pumpe-Düse Turbocharged-Diesel producing 96 kW (129 hp) and 229 ft·lbf (310 Nm) at 1900 rpm, with a six speed manual gearbox. It was named the "Diesel Car of the Year 2003" in the Scottish Car of the Year Awards.

The vRS was shown to be quicker than a similarly priced MINI Cooper around Top Gear's and Fifth Gear's test tracks.

The Fabia is sold in other countries, including India where it is available in a lower spec that does not feature painted bumpers. The Fabia was expected to arrive in 2008 for the Australian market but with low sales of the Octavia and the Roomster, it's most likely postponed.